Updating the Court of Valor

Updating the Court of Valor

The Court of Valor monument was updated on Saturday, October 2, 2010.  This year, almost 80 names were be added to the 162 already incised on the memorial’s granite surface.

The monument is dedicated to local veterans who have received valor medals acknowledging brave and heroic actions while serving the United States. All of the honorees have submitted military documents in order to prove their status as valor medal recipients. A committee of military experts has reviewed submissions and agreed that the proper criteria has been met for inclusion.

The Court of Valor was unveiled in 2009. The monument consists of a granite archway over 13′ high and more than 11′ wide; over 15,000 pounds of granite were used in its construction. Under the prominent archway is suspended an American flag, a symbol of the freedom our patriots defended. Topping the monument is an iconic piece of steel from the World Trade Center, weighing 3,000 pounds and measuring 9′ 11″ in length.

Prospect Hill Cemetery will continue to accept submissions from local veterans. Annual updating ceremonies will depend on the number of qualifying candidates. 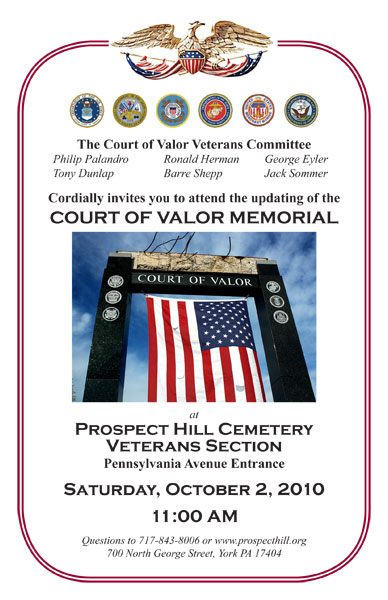