Staff Musician of the 87th Pennsylvania Infantry, Company K. Blum was one of many musicians to be discharged in 1862 when regimented bands were disabled by an act of Congress. Nearly every regiment had a band. After the war raged for a little over a year, the Union decided to abolish all its regimental bands. Some of the war musicians in the regular army were sometimes forced to take on combat duties, some were discharged. Officers generally supported having bands because of how they raised morale, most soldiers also valued the bands, even though they were asked to contribute some of their pay to the band. Various regiments found ways to evade the order. Some simply enlisted their bandsmen as privates, still more, who had discharged their bands, quietly accepted them back before the end of the year. Officially and legally, no Regiment had a band and the Commanders simply ignored any appearance to the contrary. 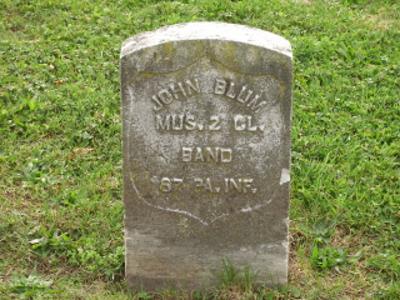